Lion Bites Arm of A Man in South Africa 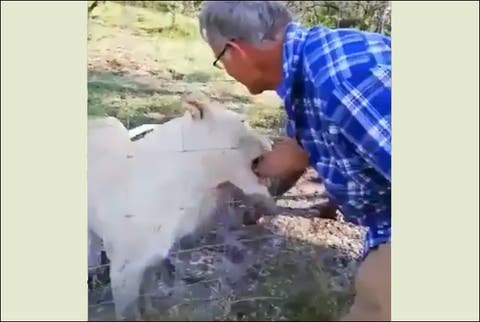 Lion Bites Arm of A Man in South Africa

Cape Town: In the open jungles of South Africa, a man trying to love a lion came out to be very dangerous for him.

According to the details, inside a wildlife park in South Africa, showing love with a lion turned out to be terrible, a man wanted to caress the head of a tiger with love, and then something really worst happened with the man.

A man named Peter was lovingly touching the tiger’s head in a wild park, his wife was capturing the scene from a mobile camera, but then the lion took his arm in his mouth and started eating it, his wife screamed.

Most people love animals, but some even dare to love wild beasts. A similar video went viral on social media showing a man touching a lion’s head with his hands.

A man named Peter put his hand in a thin iron net in the wildlife park and started touching the lion’s head. The lion probably liked the touch of the human hand, so he didn’t say anything, but then the lioness came there. Peter then tried to touch her head as well. But it cost Peter badly to do so, the tiger suddenly grabbed his loving hand in its jaws and began to eat, the wife got scared and started screaming, she, who was making the video of the scene from her mobile, stopped filming and asked for help.

Later on, Peter was taken to the hospital and he was rescued in time. However, a lot of his blood was already lost.